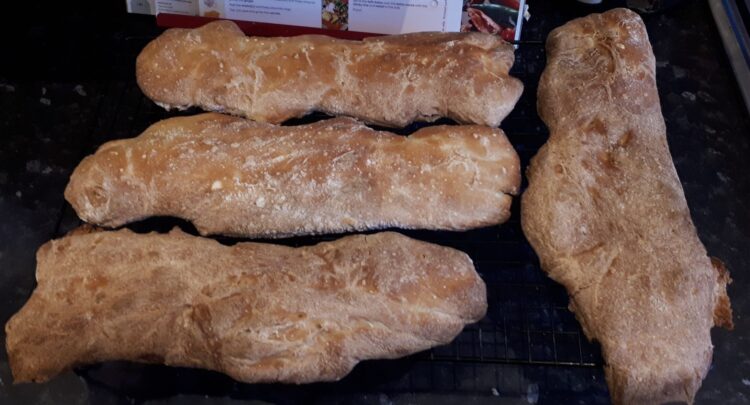 I followed PH’s instructions to the letter, made my bread dough and left it to prove in my kitchen, which had no ovens on and was a moderate temperature. Here’s the dough before proving: 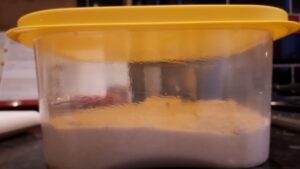 Here’s the dough after around 1 3/4 hours, you can see the sticker where I’ve marked where the dough started so that I knew it had at least doubled in size: 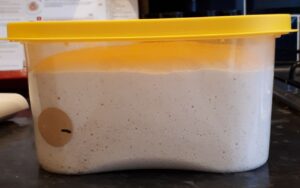 I was really pleased to see how much it had risen and had high hopes for the success of my ciabatta… until I turned it out and it just sort of flopped onto the work surface: 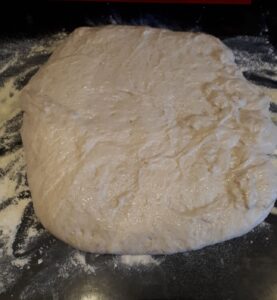 It was really very sticky and very difficult to divide equally into 4, especially since I was being as careful as I could with it because I didn’t want to knock any air out. Here’s what I managed to slop onto some baking trays: 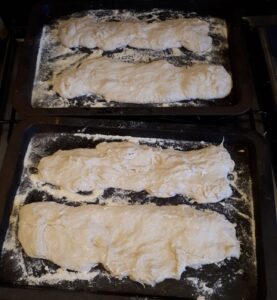 Not much changed in the 45 minute rest time so I just put it into the oven and hoped for the best. Here’s what came out: 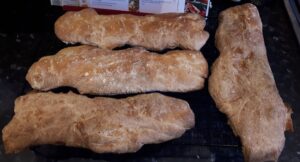 They hadn’t risen at all and got stuck to the baking trays so I really struggled to get them off. I wrapped 3 of them up to take round to my parents’ house and my boyfriend asked me if the one left was the reject loaf – that’s how awful they looked.

Here’s the inside of one: 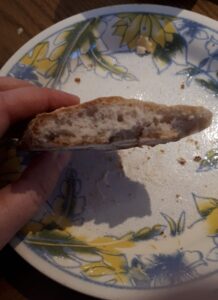 Looks nothing like ciabatta! It was all flat and disappointing. It tasted ok, just a bit tough.

I don’t think I’ll bother trying to make ciabatta again. I think this was supposed to be a shorter and easier version but it just failed for me. Personally, this recipe just solidifies my opinion that Paul Hollywood is trying to sabotage everyone’s baking because he doesn’t want anyone to be as good as him. Let me know which ciabatta recipes you’ve tried before and whether they’re any good. I don’t recommend this one, but maybe it’s obvious to someone else what I did wrong.