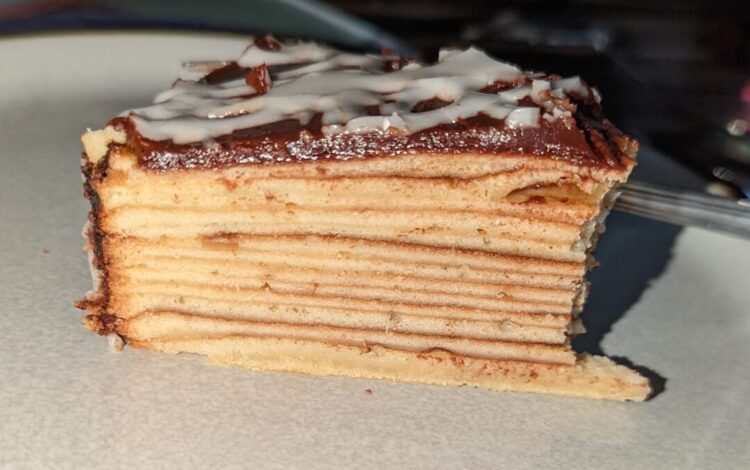 When I first saw this episode I remember watching the technical challenge and thinking “that looks pretty easy, I could probably do that” and now, 8 years later, we can find out whether my confidence was justified.

The cake mixture was a pretty standard one – though needed 3 bowls to get all of the mixing done. I knocked over the bowl of egg whites while beating the butter and sugar together so had to make a guess as to how much more eggs I needed to add. If you’ve ever had to clean up egg whites then I’m sure you’ll feel my pain. Hopefully I did a good enough job as I was in my parents’ kitchen (their grill is better than mine). 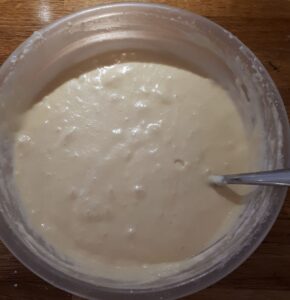 It looks a bit lumpy but I can assure you that they are air bubbles.

This cake was supposed to have 20 layers in. I didn’t have a lot of motivation to weigh it out and divide it up equally so just made a guess. Each layer was supposed to have either 2 or 3 minutes under the grill to create alternating dark golden brown and light golden brown layers, but there was a slight temperature fluctuation so it just involved a lot of watching. Here’s one of the layers: 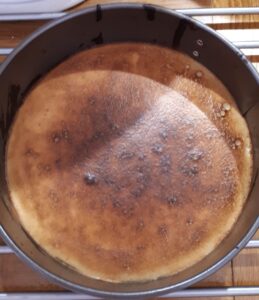 I’m pretty sure that’s one of the darker layers, but there may have been some overlap between the 2 different colours. What worried me here was the batter up the sides of the cake tin, which inevitably got quite burnt over time.

While the cake was cooling I melted the apricot jam and made the chocolate and vanilla glazes. The recipe said to use 250g of icing sugar for the vanilla glaze. I looked at the photo and decided that this was definite overkill, so used about half of that. This was still more than I needed so I’m glad I didn’t waste all of that icing sugar. The chocolate glaze was easy enough to make, but I got impatient with it cooling down and put it in the fridge for a bit. This meant that it set a little bit thicker than I’d have liked so it wasn’t easily poured over the cake. It also meant that it didn’t all drip down the sides, so at least it was a bit more tidy. Here’s the cake with the chocolate glaze: 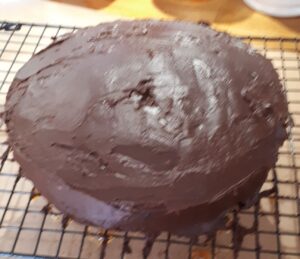 It’s a blurry photo but I think it’s clear that the glaze isn’t as smooth as it should be. When I put the vanilla glaze over the top it was less noticable: 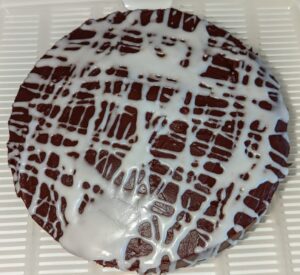 It’s not the neatest but I was going for the rustic look on purpose, honest.

The most exciting bit was to cut it open and see the layers, so here that is: 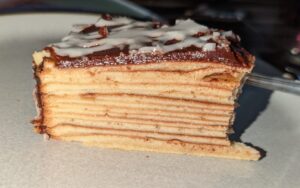 I was really pleased with how those layers looked. I think the bottom layer was a little undercooked but the rest wasn’t. I counted 12 layers, so some of the layers were probably thicker than they should have been but I don’t think in the grand scheme of things it really matters.

The cake itself was quite rubbery, dense and not very sweet. The glaze was delicious and nearly made up for it. After looking around there are recipes which but other things between the layers such as apricot jam, but that’s not what Mr. Hollywood wanted. I didn’t do loads of research to find which was the more traditional way of making it, but feel free to have a look. Overall, two of my taste testers said that they weren’t sure it was worth the effort and, although it was quite simple, baking it was a bit of a faff so I would agree. I’ve also just had a slice 2 days after making it and it’s got worse. I might add some jam to it.

The last 2 photos on this post were taken by my sister Charlotte – thank you for these, they’re much better than the photos I took.