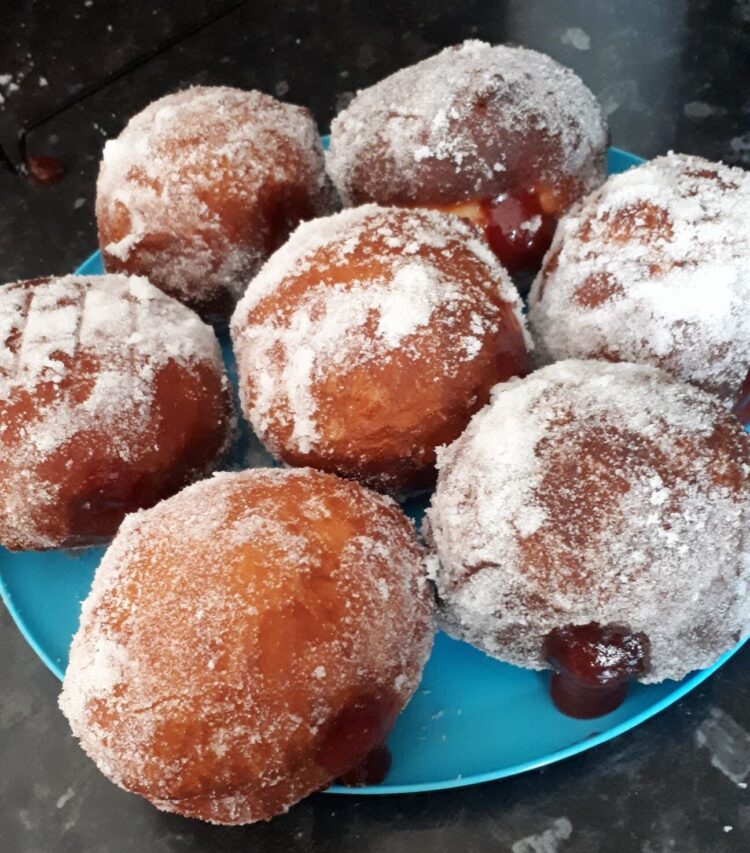 My first bake off challenge for months! I have been reluctant to use up my bread flour since there’s a shortage, but I managed to get some more recently so decided it was time to go for it. Here’s the recipe:

This is a Paul Hollywood dough recipe, so expect sticky dough and messy fingers. I treated myself to a bread scraper after seeing how sticky this dough was on the GBBO, it definitely helped. Here’s the dough after kneading and scraping it off my work surface to get into a bowl: See how it has lovingly and neatly been placed into the bowl? Here’s how it looked after proving for 1 hour: It had so many lovely air bubbles in, I found it really satisfying knocking it back, however, it was still really sticky and difficult to roll into balls! I used probably too much flour so that I could handle the dough but they ended up looking quite doughnutty shaped: I did make 10 of them, I just didn’t have a baking sheet big enough for all of them. The one that looks smaller in this photo was one that I redid because it was starting to flatten out a bit much. I weighed them as I was making them so they’re pretty equal in size, I’m getting into the habit of doing that now, I’m trying hard to have neater bakes! Here they are after the second prove: I tried to pick one up before taking this photo, which is why one of them looks a bit squashed because it got a bit stuck…. the sticky dough tried to get the better of me again.

I don’t own a deep fat fryer and didn’t want to buy one just for this, so I did it the scary way. I half filled my biggest saucepan with sunflower oil and used a thermometer to check when it had reached 180ºC. This seemed to work pretty well but I had to check it before each batch of doughnuts to try and keep it consistent. I was expecting spitting oil and a fire risk but it was only just starting to bubble when at temperature so I felt very safe. I cooked the doughnuts 3 at a time. I’m sure I heard somewhere that you know they’re done on one side when they flip over when you poke them, I quite enjoyed doing that. Here they are cooking nicely: I was really organised and prepared with my bowl of sugar and cooling rack ready so it didn’t actually take too long for me to cook them all. I let them cool before filling them, this caused a lot of mess, I think I covered most of the kitchen in jam. I used seedless jam, stirred it well so that it went smooth and didn’t bother sieving it before piping. I used a knife to make a hole in the doughnut and then just a normal piping bag to add the jam in. There was one moment when the nozzle got blocked because of a lump, so maybe sieving it would have been a better idea. Here’s my final creation: 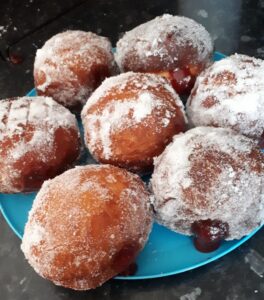 I couldn’t quite get all 10 on the plate but there WERE 10, I promise. Look how the jam is oozing out of them. I safely and socially distancingly dropped some off to family members, then made myself a cup of tea and cut one in half only to see that the middle was raw! I was so disappointed and felt bad for giving raw doughnuts to my family, but they all said that theirs were cooked all the way through! I must have just picked the biggest one for myself. I ate most of it anyway and it was pretty good. Here’s the inside of the second, fully cooked one I had: I was pleased with how much jam I’d managed to get inside. Overall they weren’t too difficult to make, they just took a lot of time. I could clean up during proving steps so it was quite easy to keep everything organised. I had one the day after I made them and it had already gone a bit stale so I wouldn’t recommend keeping them for very long. Here’s some feedback from my family:

“Tasty and jammy. Mmm, that was luscious”

“It was delicious, soft and fluffy with a perfect crust. Plenty of jam and a sticky mess.”

“Yes it was cooked in the middle.”

I’m already preparing for the next bake so hopefully it won’t be as long a wait, I just have to get hold of some wholemeal flour. Wish me luck!