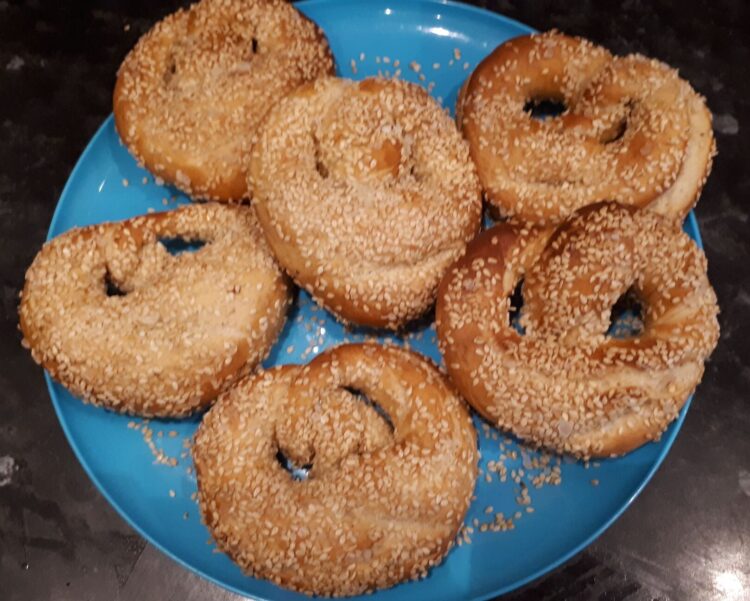 This is the FINAL for series 4! It has taken much too long to get to this point, but I’m really pleased I’ve picked this back up again. I feel like I’ve got a bit of momentum going and will be ready to start series 5 soon.

I’ve only had these sorts of pretzels a couple of times so I didn’t have much to compare them to. Here’s the recipe: https://www.bbc.co.uk/food/recipes/pretzels_71296

I managed to find some malt extract at Holland and Barrett. I have a lot left over now so might have to have a little look around for some more recipes which have it in.

The dough for this one was quite stiff. I’m not sure whether my kneading technique is any good, because it said to knead for 10 minutes but at this time the dough still wasn’t very stretchy and was breaking apart easily. After about 25 minutes I gave up and divided the dough in two to prove. My wrists were pretty sore at this point though, maybe next time I’ll use my dough hook.

Here’s the dough before the prove:

There were a lot of poppy seeds to mix into the orange and poppy seed dough, they got everywhere! I had used my grater to zest the oranges, there were little bits stuck to the grater so I just used the dough to take them off – I’m very resourceful.

I divided each half into 6 by weighing them, I’m not so good at just eyeballing it. I followed Paul Hollywood’s recommendation for rolling them out – rolling them once, leaving them to relax and then rolling them again. I’m usually great at rolling things like this out evenly, so was quite pleased that they were supposed to have a bulge in the middle. Here’s a photo of 6 of my rolled out doughs at different stages of shrinking back: 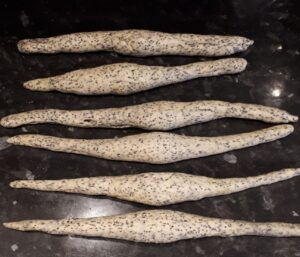 The recipe suggested using a fancy flippy way of shaping the pretzels but didn’t really describe it well. I was determined to have a go at this rather than doing it the easy way, unfortunately I couldn’t find any vides on YouTube to instruct how exactly to do it. I ended up just trying it very slowly to get used to the movement, then trying to speed it up. By the time I’d shaped 12 I was nearly there, but I think I’m still not quite pro level. Bit more practise needed!

Here are my orange and poppy seed ones before baking, they’re not by any means identical but they’re still pretzel shaped: 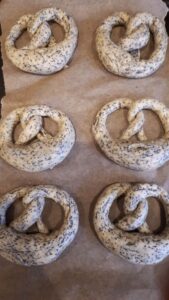 At this point I realised that the recipe wanted 7 litres of boiling water. My kettle only holds just under 2 litres, and I have no idea what volume my biggest saucepan holds, but 7 litres was much too ambitious. I just filled it up as much as I could, threw in about 3 tsps of bicarbonate of soda and hoped. I don’t know the point of boiling them for 5 seconds, but I do as I’m told.

While they were baking I started making the orange syrup. It took quite a long time for the syrup to reduce down, I think if I’d have realised then I’d have made it while they were proving.

They took just under 20 minutes to bake. Here’s proof that I also made the savoury ones: 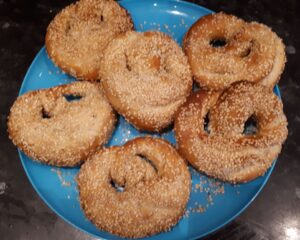 There they are, giving a little smile to you all.

These had a crispy outside and were soft in the middle. My taste tester said they were “amazing”. The orange and poppy seed ones were also good, but I wasn’t a big fan of the candied zest. Unfortunately, the next day they had already started to taste a bit stale, so I recommend having them fresh out of the oven, or at least on the same day. I’m definitely going to make these again, I might experiment with different flavours though.