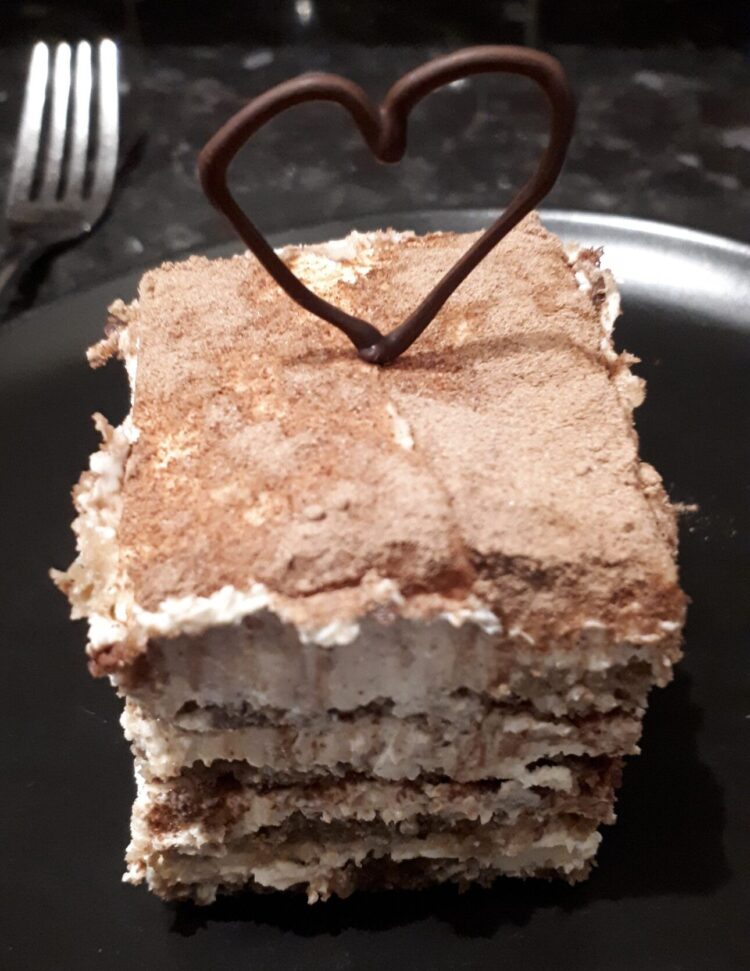 I don’t think I’ve ever tried tiramisu. I don’t drink coffee and I don’t like soggy cake, so I was hoping that this would surprise me and taste delicious. Here’s Mary Berry’s recipe for the tiramisu cake used in the Great British Bake off Technical challenge: https://www.bbc.co.uk/food/recipes/tiramisu_cake_13686

I bought all of the ingredients to this, then just before starting, decided I’d better measure my swiss roll tin to make sure it was the right size. It wasn’t. I started doing some calculations to work out the best way of doing this – should I just bake 2 sponges in my smaller tin? Should I make a smaller cake? But then I noticed a baking tray on the side and measured that – it was the exact right size! I used to use baking trays to make swiss rolls before I bought a specific tin for it so decided to just go for it. The sponge was easy enough to make – the recipe did say to tilt the tin to get it level but I used a spatula to give it a bit more encouragement.

After the cake was baked and cooled it needed to be cut horizontally to 2 very thin layers. Here’s how thin the cake was: 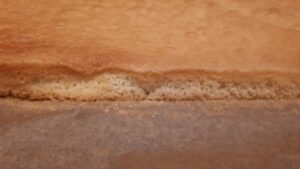 To cut this I used a technique which I think I saw on an Ann Reardon YouTube video, but I can’t find it! I found a flat object which was about half the size of the cake and used this to rest my long knife on while cutting through the cake. This worked quite well, but I made the mistake of not peeling the baking paper off before cutting. This meant that I had to remove the baking paper from a very thin cake, which caused it to tear slightly. When assembling I just patched these bits up with some of the leftovers. These were cut into 4 x 7 inch squares

I didn’t have any brandy and didn’t want to buy any since I don’t drink it. I decided to use blackberry mead instead because I thought it would work well.

The creamy filling was easy enough to make, there was just a lot of it to mix and I wasn’t really sure what consistency it was supposed to be other than “spreadable”. I think it was slightly too thick to spread easily but it did the job.

I have a great cake tin which I used to assemble the cake. It’s adjustable so useful for any size cake. Grating the chocolate for this actually turned out to be pretty hard work, 65 g felt like a lot more! To assemble the cake, first I put in the first sponge layer, then the coffee and mead mixture then the cream filling and then I started on the next cake and coffee layer before remembering that a third of the chocolate was supposed to go on. I made a mess of my hands throwing it under the wet sponge and carried on. I recommend using a spoon to deal with grated chocolate as it all just melted in my hand.

Here’s a photo of the cake before I put it in the fridge. You can see my cool cake tin here: 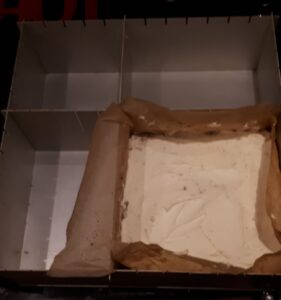 I cheated slightly when making the chocolate shapes. Mary Berry suggested melting the chocolate over hot water and waiting around for it to be the correct temperature, but I was in a bit of a rush. I melted my chocolate in the microwave in short bursts and added some chopped chocolate at the end. I learned a lot about melting chocolate from Ann Reardon’s chocolate video which is here. I made hearts with stems which were supposed to be the same size but absolutely were not. Here’s the finished cake: 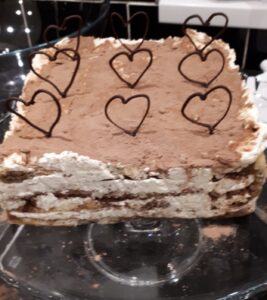 I wasn’t happy with how the sides looked, I guess I didn’t get right to the edges of the tin with my sponges, however, look how pretty it is when I cut it up: 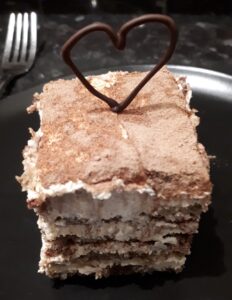 This made 9 generous portions, which I think, were delicious. The blackberry mead flavour was overpowered by the coffee so I don’t think it made much of a difference and the concern over the soggy sponges was unnecessary. Assembling the cake required a lot of space and made a bit of a mess but I’d still make this cake again.