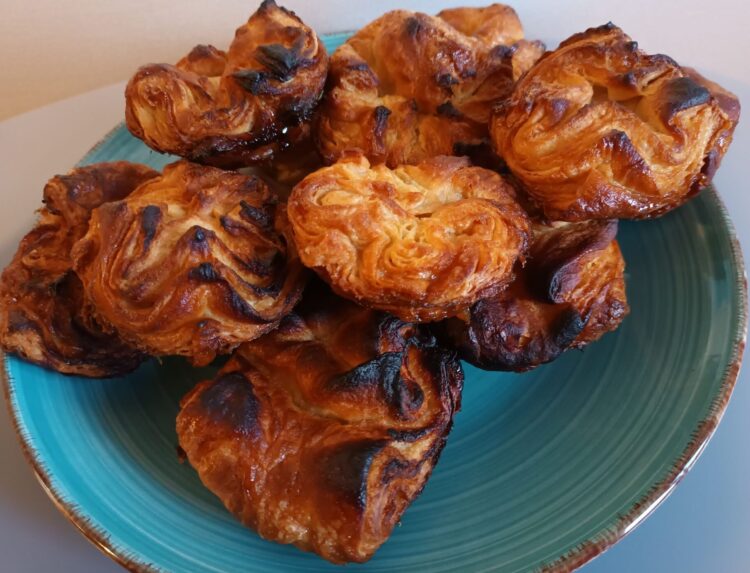 This is a puff pastry but made with yeast so I had no idea how this would turn out.

Making the dough was pretty easy because I just used the dough hook on my stand mixer. Here it is all ready to prove 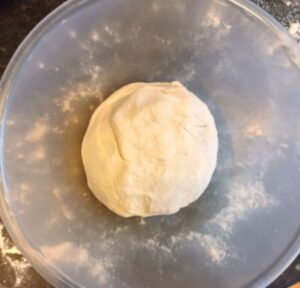 I mistakenly forgot to take a photo after the prove and I know you all love the before and after proving pics so I can only apologise. Imagine the above photo but bigger.

I got the butter out of the fridge to bash it and roll it. It gave my arms a really good work out and made a lot of noise, this was really tough. I also had the bright idea to cut the rectangle of butter and try to rearrange it into a square… that didn’t work out though, I don’t recommend it. Here’s the butter sitting on top of the proved and rolled out pastry: 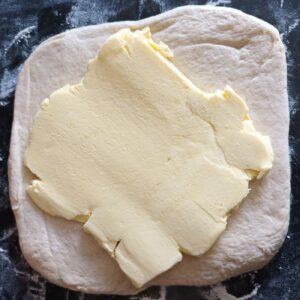 I then folded the pastry over the butter and started to roll it out. At this point the butter started to do something weird. I couldn’t tell whether it was breaking apart completely or there were just thicker patches dotted throughout. I carried on anyway with my rolling and folding and chilling until it was ready to add the sugar. The sugar was added before a folding step, but this made the pastry even more difficult to roll because it stopped the layers sticking together. I’m actually really bad at rolling out anything, so when I cut it all of the pieces were uneven. Here it is: 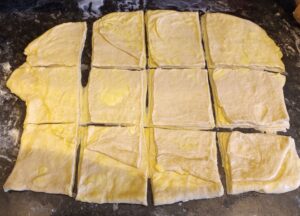 You can see here some of the thicker bits of butter and at the bottom where the folded over layers were giving me trouble. Maybe I should have cut the sides to tidy it up but I count that as wasting good pastry.

Here you can see all of the layers that I’d made from all of the rolling and folding: 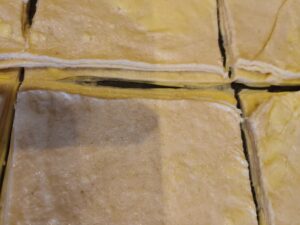 Shaping the kouign amann was a little fiddly – I think possibly because some of them were much too big. I put a strips of baking paper on the bottom of the tin because I’ve had problems with pastry coming out of the tin before. Here they are ready to go in the oven: 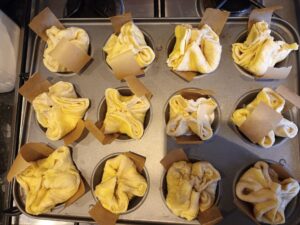 I put foil on the top of them after about 20 minutes but it didn’t really stop all of them from catching a little bit. I used the baking paper to take them out of the tin pretty much straight away and they lifted out easily without me burning my fingers.

Here’s a photo of them on a plate: 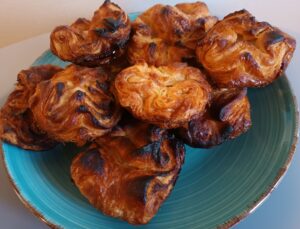 I tried one when it was still warm and was a little disappointed. I tried another one after it had cooled though and it was much better. They tasted very butter (not surprising) and they were flaky. A fan said they were “crispy on the outside and delicious”.

Overall I’m not sure I’d make them again – they took a long time and made a lot of mess with all the flour and rolling. If you fancy them give them a go, maybe you’ll disagree with me.