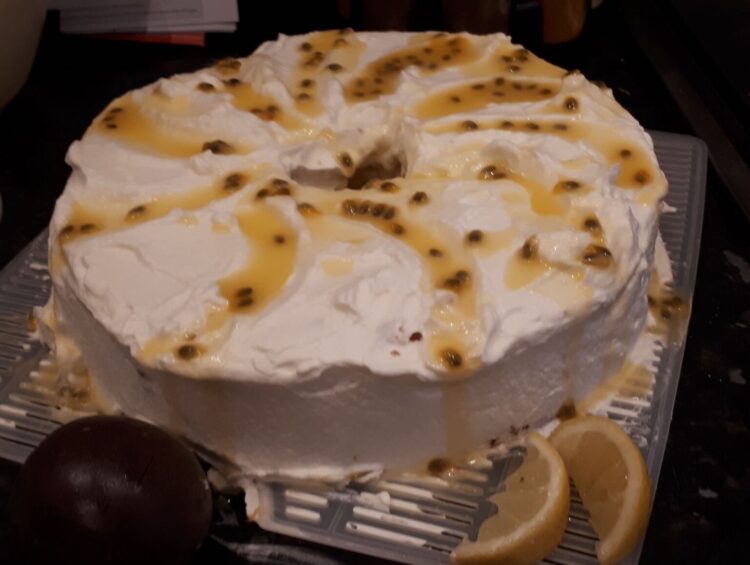 I treated myself to a new cake tin for this recipe in the hope that I’d like it and want to bake it again.

I’d never tried an angel food cake before so had no idea what it was going to taste like. I like that this recipe also includes what to do with your 10 egg yolks. Usually I just add spare eggs to full eggs and scramble them, but I wasn’t hungry enough for 10 yolks. Since I’m not able to watch the episodes anymore I did actually do a bit of research on this cake – I have to serve it to people so wanted it to work out. I got some tips from this which I will share with you.

I’ve separated so many eggs in the last few years but still get anxious that I’ll break the yolk when cracking the shell. I managed without any casualties for this though, here’s what 10 egg whites look like: 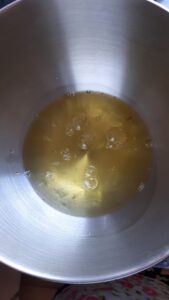 I noticed that my stand mixer was quite slow in getting the egg whites to peaks compared to using my hand mixer. I’d never tried it with my stand mixer before so I wasn’t sure whether it was due to the volume of eggs or whether my stand mixer just isn’t that good at whisking (it’s not a fancy one). Does anyone have any thoughts on this? I got there eventually though, here they are after being whipped up, mixed with the other ingredients and put into my fancy new baking tin: 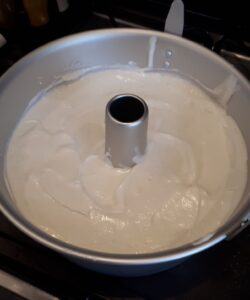 The recipe said to bake from 45 to 50 minutes, but I checked it after 40 and it looked fine. The top cracked when I poked it to see whether it would spring back, but not to detriment of the cake. Here it is all turned out and ready to decorate: 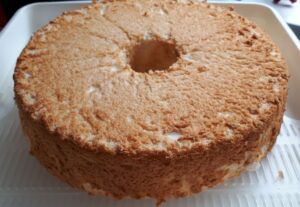 I’ve never made lemon curd before and actually had no idea what it was even made of. There’s a lot of sugar in lemon curd, so even though it calls itself lemon, I don’t think it counts as one of your 5 a day. I’m not quite sure I got it right as the two jars I have left have separated in the fridge. Passionfruit is one of those fruits which don’t look very appetising but actually taste great, which just goes to show that you shouldn’t judge food on appearances.

Here’s my finished angel food cake, I put slices of lemon next to it in an attempt to make it look fancy but the mess I made of the cream sort of ruins it: 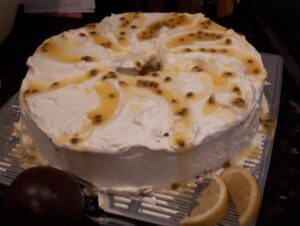 Here’s a slice of the cake, it’s very white inside: 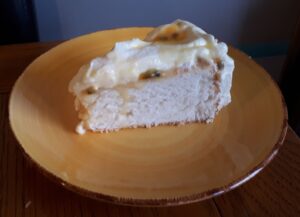 I thought that this tasted absolutely delicious. The sponge was very sweet. moist and airy, I really liked it. People who tried it described it as “lovely”, “good” and “fluffy”, so I was pleased with the positive feedback. One person even asked if they could drink the leftover lemon and passionfruit drizzle (he didn’t).