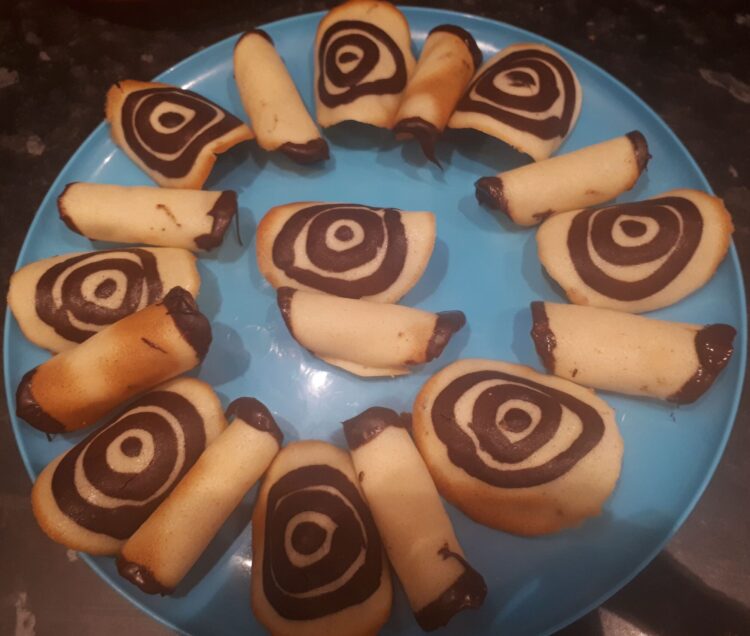 There’s one of those biscuit tins which you get at Christmas which always seems to have tuiles in and they are my favourite. I was really hoping that making them fresh would make them even better.

Here’s the recipe: https://www.bbc.co.uk/food/recipes/tuiles_with_chocolate_64665 This includes chocolate mousse, which I’m pretty sure the bakers in the GBBO didn’t need to do, so I left those out. My plan was to just make the 9 round ones and the 9 cigar shaped ones.

The recipe didn’t say what size to make the tuiles so I just guessed and cut a circle with a 2 inch diameter out of the lid of a margarine tub for a template. Here it is: 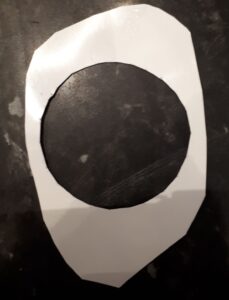 Making the batter was very similar to a cake batter. I weighed out one sixth to add the cocoa powder to, here they are: 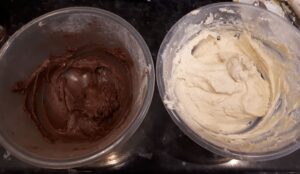 I made the curved tuiles first, I thought these would be easier than the cigar shaped ones. I managed to get them pretty thin using my template, then I made my own piping bag from baking paper: 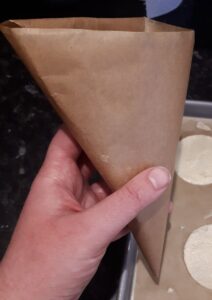 I usually make one of these for piping thing when I only have a low volume, like chocolate shapes, so thought this would be perfect for these. Here are some of the curved ones before baking: 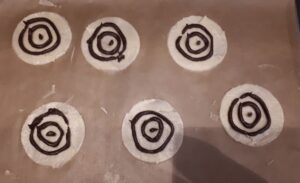 The circles were a bit wobbly but I wasn’t too worried about that. When it came to shaping them I found it quite easy, they were soft enough to curve and I assumed they would firm up later on. I was wrong. I had some mixture left over so I tried making them thinner. These cooled down crispier but also were only pliable for about 5 seconds after coming out of the oven so my fingers were just burning hot. The cigar shaped ones were even more fiddly to shape and were just breaking apart.

I had A LOT OF PRACTICE trying to get this right – the recipe for 18 tuiles could have made about 100, seriously, I gave up after making about 60 and I still had a load of batter left over. I really struggled to get these right, they either looked good and tasted more like cake than biscuits, or they broken while making them but had a good snap. Here are some of the prettiest looking ones: 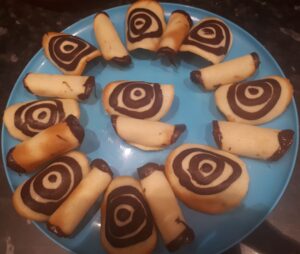 You can see that some of those circles are starting to look a bit better – I suppose this was due to the mass amount of practice I had. My piping bag held up pretty well though!

I have no desire to make these again, but if for some reason I haven’t put any of you off from making them, then my recommendation would be to make half the batter and possibly try slightly larger ones. Good luck though, please let me know if you succeed with these!