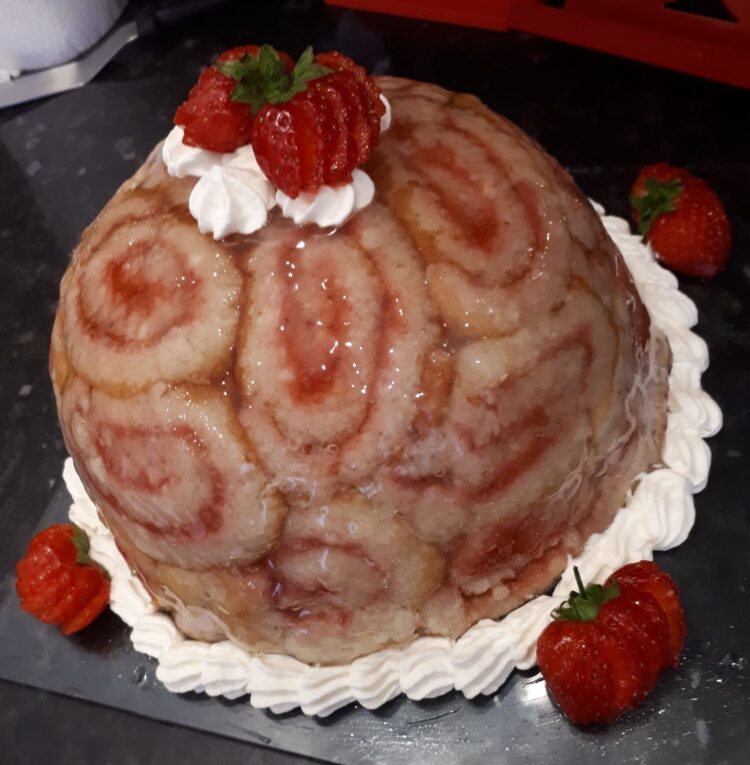 A Charlotte Royale is a cake that also looks like a brain. Here’s the Mary Berry recipe I used https://www.bbc.co.uk/food/recipes/charlotte_royale_85654

Yes, 14 eggs in total, leaving 8 egg whites to find something to make with…

I’ve made jam before but this was the first time I made it using a sugar thermometer, however, I didn’t do such a good job. I’ve made swiss rolls plenty of times before so had no problem with the sponge, but the jam didn’t set well and ended up making my sponge rolls quite soggy. I still managed to get a good roll out of it though.. I don’t know why one is flatter than the other but asymmetry can be beautiful too. 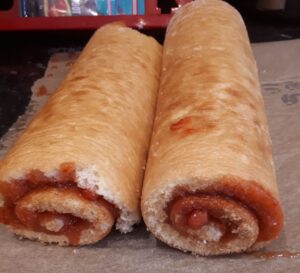 I’m not a big fan of raspberry so I didn’t buy any raspberry liqueur to add to the bavarois – I was planning on adding some raspberry syrup but forgot. I’ve never made bavarois before so wasn’t quite sure what to expect. I’m pretty sure it wasn’t supposed to curdle though… I whisked to try to get rid of some of the lumps but it looked pretty grim. I didn’t have the heart to start again though so I just crossed my fingers and used it anyway. Adding the cream helped it a bit. Here it is in all its glory (some of the bits are from the raspberry): 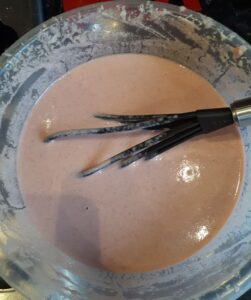 Trying to assemble round slices of cake into a semi-spherical bowl isn’t really the most satisfying jigsaw I’ve ever done. I was just hoping that it would look a bit better when I turned it out. Here’s what it looked like when i put it in the fridge to set: 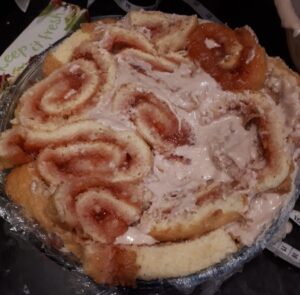 I just couldn’t get the sponge to sit nicely on my bavarois – I was lucky though, they didn’t completely sink overnight. I had loads of bavarois left (classic Mary Berry move), so put some into ramekins to have as a dessert.

It looked pretty good when I turned it out the next day, I was quite happy with it, especially since that mess above was now on the bottom so couldn’t be seen. I’d never used arrowroot before so had no idea what to expect. I was definitely not expecting something gloopy and sticky and mucoid to try and glaze a cake with. I tried my best though and managed to cover the whole thing. Next I tried something fancy looking but actually really easy to do with some strawberries to finish it off, and here it is: 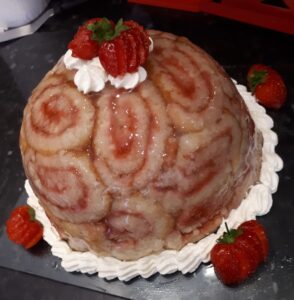 Very brain-like, shiny and pink, without too much bavarois showing on the outside (it did set by the way). I hadn’t tried one of these before so didn’t really know what it was supposed to taste like. The sponge was quite soggy – I wasn’t sure whether that was because I’d messed up the jam or whether it was supposed to be like that. It was quite a lot like a trifle, which was a shame because I really don’t like trifle. Other people told me it tasted nice, maybe they were being polite. I think maybe if the jam had set properly it would have been better. The bavarois didn’t have enough flavour, I could taste the gelatine in it. That could also be because I don’t like raspberry though – I think adding the liqueur would have improved this. If you like raspberry trifle then go ahead and bake this (don’t bother with the jam though, who even bothers making jam?!) Personally, I don’t think I’d bake this again. With the leftover egg whites I made a delicious angel cake and I still have too much arrowroot I don’t know what to do with.