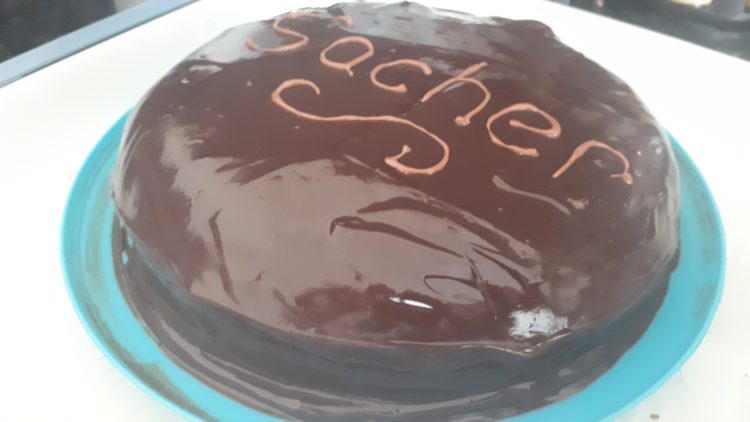 I made it to the series 2 final! I’m really pleased with myself for sticking with this for so long, I’ve had a bit of a baking spree over the last few weeks to get to this point and I’ve actually made it. Well done to me.

I decided to make the sachertorte for a charity bake off event I was doing at work. The recipe said that it improves if left a day or two before cutting, so it was a good opportunity to make this the day before and it still be good for Monday lunch time.

I assumed that this would be a difficult recipe since it was for the final, but when I read through the steps it’s using a lot of techniques I already know how to do. The batter was quite similar to the chocolate roulade and I’ve made truffles before so the ganache wasn’t scary for me either. I didn’t have a 9 inch tin as specified, but I decided to just go with the 8 inch, I was sure this wouldn’t cause any problems.

I was very gentle folding in my whites and managed to get no streaky bits, here it is ready to go into the oven: 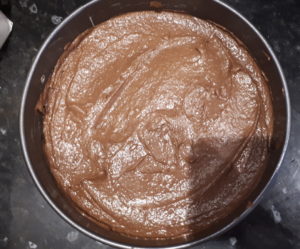 I tried my best to get the top flat and smooth at this point and think I managed it. Here it is coming out of the oven: 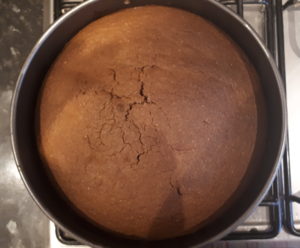 It had cracks on the top, I don’t know if that’s ok, but I decided it was fine. I was a little concerned that it had risen so the top was domed, but this dropped down as it was cooling. I decided this was fine too.

I’d never sieved jam before, it doesn’t work in the same way as flour but I managed to get it through. I wasn’t sure how long to warm it up for so I just waited until it was a bit more runny. Here’s my jammy cake: 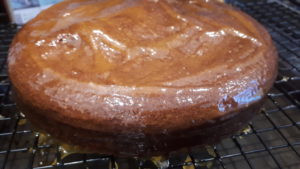 The top was a bit bumpy but again, I decided that was fine too. Here’s the finished article: 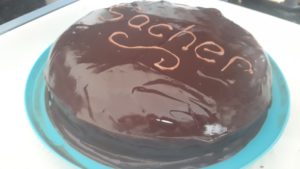 Look how shiny it is! It’s so pretty and I managed to write “Sacher” without messing it up AND put a little squiggle underneath! I’ve been trying to get my bakes looking good and I think I’ve finally achieved it with this one, I was so happy with how it looked and the smell was amazing. When I cut a slice there was a little bit of undercooked batter inside, which was a shame, I don’t think you can really tell in this photo, I suppose I could have just lied and said it was fine: 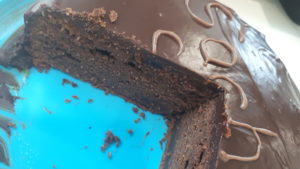 I have no idea what a sachertorte is supposed to taste like but I thought that this was delicious. I loved the apricot jam, thought the cake texture worked really well and the ganache was sweet without being too rich. I definitely encourage all of you to make one of these! It doesn’t matter if you use an 8 inch tin instead of a 9 inch tin by the way. Here are some quotes from less biased people:

“It’s lovely, I can taste the almonds and the apricot and it’s lighter than I thought it would be”

“The apricot jam was weird”

That’s it! Series 2 over! I am going to have a few weeks break and try and find some baba tins to borrow. I don’t really want to buy them just for one bake, I’m not sure I’d use them again. Otherwise, I might attempt to fashion some out of tins and baking paper. Does anyone have any ideas?