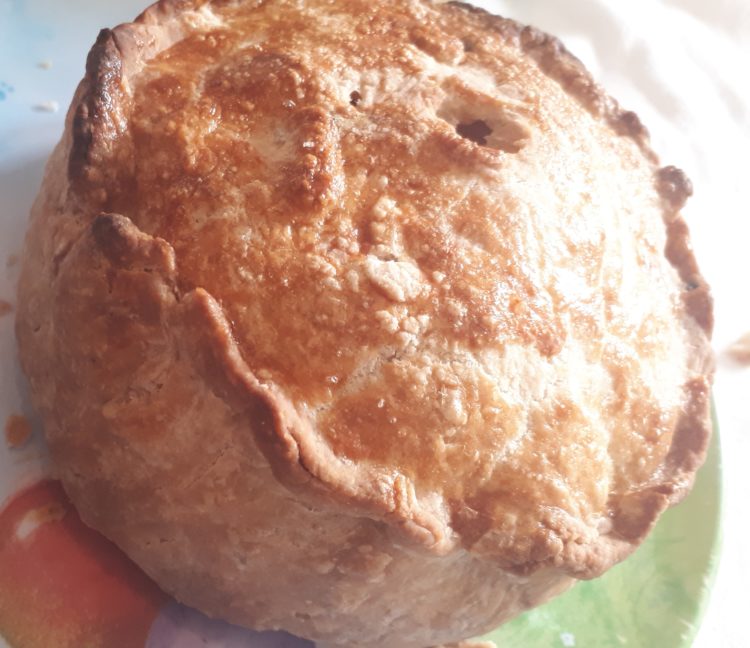 I was looking forward to trying to improve my hot water crust pastry skills, this time without having to mess around with quail eggs! (See my previous blog post about pork pies here). Here’s the recipe for the hand-raised chicken and bacon pie made in the bake off https://www.bbc.co.uk/food/recipes/hand-raised_chicken_and_12433

The dough for this didn’t look very appetising. I think it’s knowing that the lard is in there, which smells awful. It’s quite squishy and easy to handle though really. 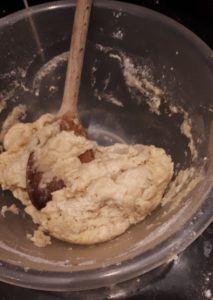 I shaped the dough round jam jars as it suggests in the recipe rather than going and buying a dolly especially, it’s a lot of work and not something I think I’ll make regularly! Here are my pies around the jam jars: 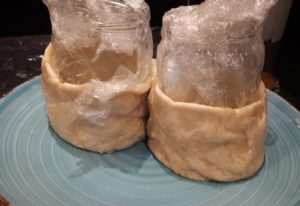 They looked fine at this point, but they did start to droop a bit. I had to put a spoon between them to stop them sticking together, then realised I should have put flour on the plate. A bit of rearranging had to be done before I filled them and put the lids on. Here’s one ready to go in: 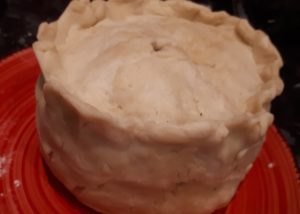 My crimping looked a bit pathetic but it was actually holding together pretty well. Notice that at this point I’d changed the plate… They just weren’t doing well together sharing a plate so I had to separate them. This time the recipe said to egg wash the top – I think all over would have looked a bit better but I’m not going to argue with Paul Hollywood.

After baking it became apparent that one had a big hole in the bottom. Luckily the other was held together well, so at least one of them had jelly which wasn’t leaking out the bottom! Don’t worry, I put something underneath to catch it. Here is a completed pie: 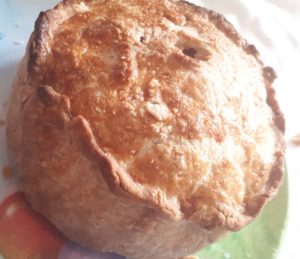 I don’t think you can really tell the scale from these photos, but to me it was very obvious that the pie had got much wider than it was originally! I think this was due to a combination of it being a bit difficult to get the pie off the jars (I didn’t want to add hot water to the jars because I wanted to pretend that it was a pie dolly). Also, there was a lot of filling for the pies and I didn’t want to waste any. They were packed full of the chicken, bacon and apricots! This seemed to stretch the pie a bit as I was filling it. Here you can see the layers inside the pie: 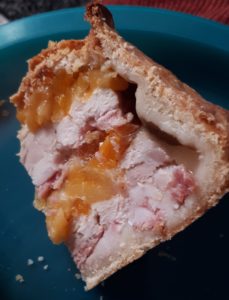 I’m pretty pleased with how thin the pastry was – this was the one which held together well too!

My family were the lucky ones who got chance to try this, and the good thing about family is they will always tell you the truth about your baking! The overall opinion was that the pastry was crusty and good, but there was some difference of opinion about whether the apricots were nice in it. I don’t mind that because it wasn’t my choice to put the apricots in.

I hope you liked all of my photos in this blog and that it hasn’t made you hungry!